As more families return to remote learning amid quarantines and school closures, experts say reliable and consistent access to devices and the internet at home remains elusive for many students who need it to follow their schoolwork.

Home internet access for college students has improved since the pandemic began with the help of philanthropy, federal relief funding and other efforts – but obstacles remain, including a lack of devices , slow speeds and financial obstacles.

Concerns about the digital divide have shifted to families who are “underconnected” and can only access the internet sporadically, said Vikki Katz, a professor of communications at Rutgers University.

“It’s about whether or not you can withstand the disruptions of these quick pivots in a way that doesn’t derail your learning,” she said.

A year into the pandemic, more than half of families surveyed by Katz reported that their children’s ability to connect to online classes had been disrupted in some way.

According to data from the Pew Research Center, racial and income differences persist in home Internet access. A survey conducted in April 2020 found that during the first school closures, 59% of low-income families faced digital barriers, such as having to log in from a smartphone, not having a device or having to use a public network because a home network was not reliable enough.

About 34% of households earning less than $30,000 reported struggling to pay their home internet bills, as did 25% of those earning between $30,000 and $50,000. Compared to white households, black and Hispanic families were less likely to have access to broadband and computers at home.

When April Schneider’s children returned to in-person classes this year, she believed they were leaving behind the struggles of more than a year of remote learning, like trouble with borrowed tablets or missed lessons because that children could not connect to their virtual school. .

But the coronavirus cases in New York City classrooms and the quarantines that followed sent her children back to learning at home. Without personal devices for each child, Schneider said, they largely had nothing to do while stuck at home.

“So you walk away, without a computer, and you’re back to square one as if covid had just started again in a smaller form,” she said.

For the kids at Schneider, not having enough assistive devices for remote learning in the previous school year meant missing homework and class.

She said the children found it difficult to concentrate on their work, even though they were given homework on paper. During quarantine periods this school year, she said, they have been largely unable to participate in any instruction.

“Without the gear…their experience was that they were more off than off,” Schneider said. “As soon as they said school was going [back to in-person instruction] … I just had to take a chance and send them. They didn’t need to leave school anymore.”

Even before the pandemic sent most schools to some form of remote learning, classrooms increasingly embraced the role of technology in teaching, creating a “homework divide” between those who have and do not have access to the internet and devices at home. According to pre-pandemic census data, about 2.9 million schoolchildren lived in households without internet access and about 2.1 million lived in households without laptops or desktops.

Some families are frustrated that nothing has been done to close the gap.

When Pittsburgh schools switched to online learning in March 2020, Janice Myers and her four grandchildren shared a single laptop. One month she struggled to pay the internet bill on her fixed retirement income.

She tried to access the company’s $10 monthly fee designed to keep low-income kids connected during the pandemic, but said she was told she didn’t qualify because she was an existing client.

This school year, the children were adjusting well to in-person learning until a quarantine sent them home for a week, Myers said. Around Thanksgiving, the school closed in-person classes again, this time for nearly three weeks. Both times the school did not send the children home with tablets, leaving them with little instruction except for a thin packet of worksheets, she said.

“In my opinion, you’ve had an entire school year to learn how to better prepare, be proactive, and incorporate a plan B in no time,” she said. “There was no reason why every student, when they returned to school, shouldn’t receive or keep their laptop.”

Among the districts using some of their federal relief money to improve home internet access is the Chula Vista Elementary School District in California, which is building the cost of hotspots and other internet services into the budget for the next three years. It prioritizes internet hotspots for children who have the most difficulty connecting to school, such as foster children and young people in housing instability.

Deputy Superintendent Matthew Tessier said the district has found that many low-income families can access the Internet through a wireless phone, but face limitations such as data caps and set monthly minutes. These caps often made it difficult for children to connect to homework and online resources even before the pandemic.

Identifying the children who need them the most and having devices ready to use can help minimize the impact of learning disruptions, Katz said.

“All of these conversations we keep having about learning loss, whether or not we should use that term, place responsibility and blame for what children have learned on students and family…instead of acknowledging that it’s always the school’s responsibility to close that gap when they send the kids home,” Katz said.

Abigail Schneider, 8, completes a level of her learning game on a laptop, Wednesday, Dec. 8, 2021, in the Brooklyn borough of New York. “I’m determined to push and push to bring them the things that help them,” April Schneider said. “I have to go above and beyond to make sure all the requirements they need are met.” (AP Photo/John Minchillo) 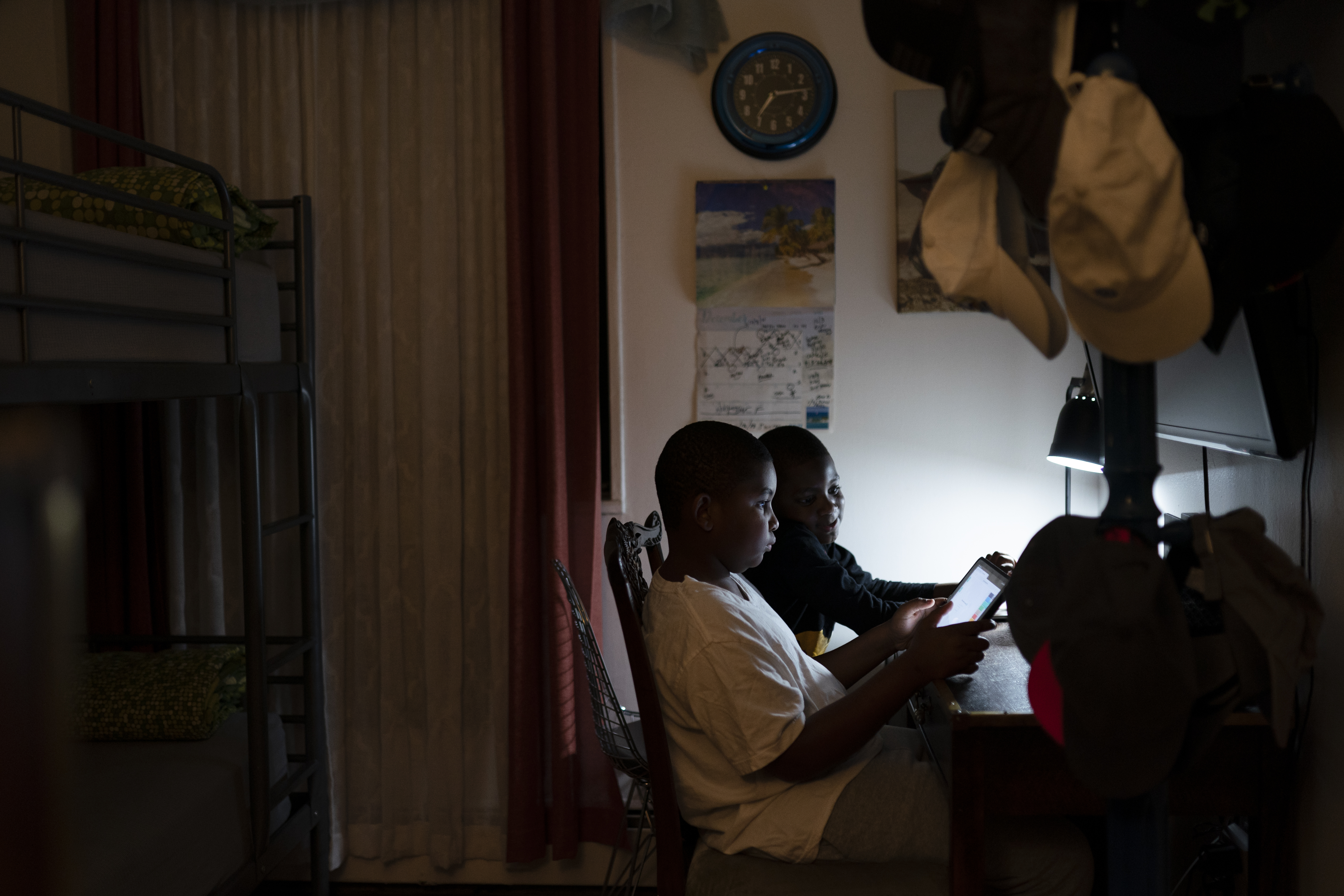 Adam Schneider, 7, center right, reads on a tablet with his older brother Isaiah, 9, in their bedroom, Wednesday, Dec. 8, 2021, in the Brooklyn borough of New York. Their mother, April Schneider, says she’s lucky her two oldest go to the same school and can share technology. “When one computer is down, we can use the other,” Schneider said. “We need more computers. More staff. More awareness.” (AP Photo/John Minchillo) 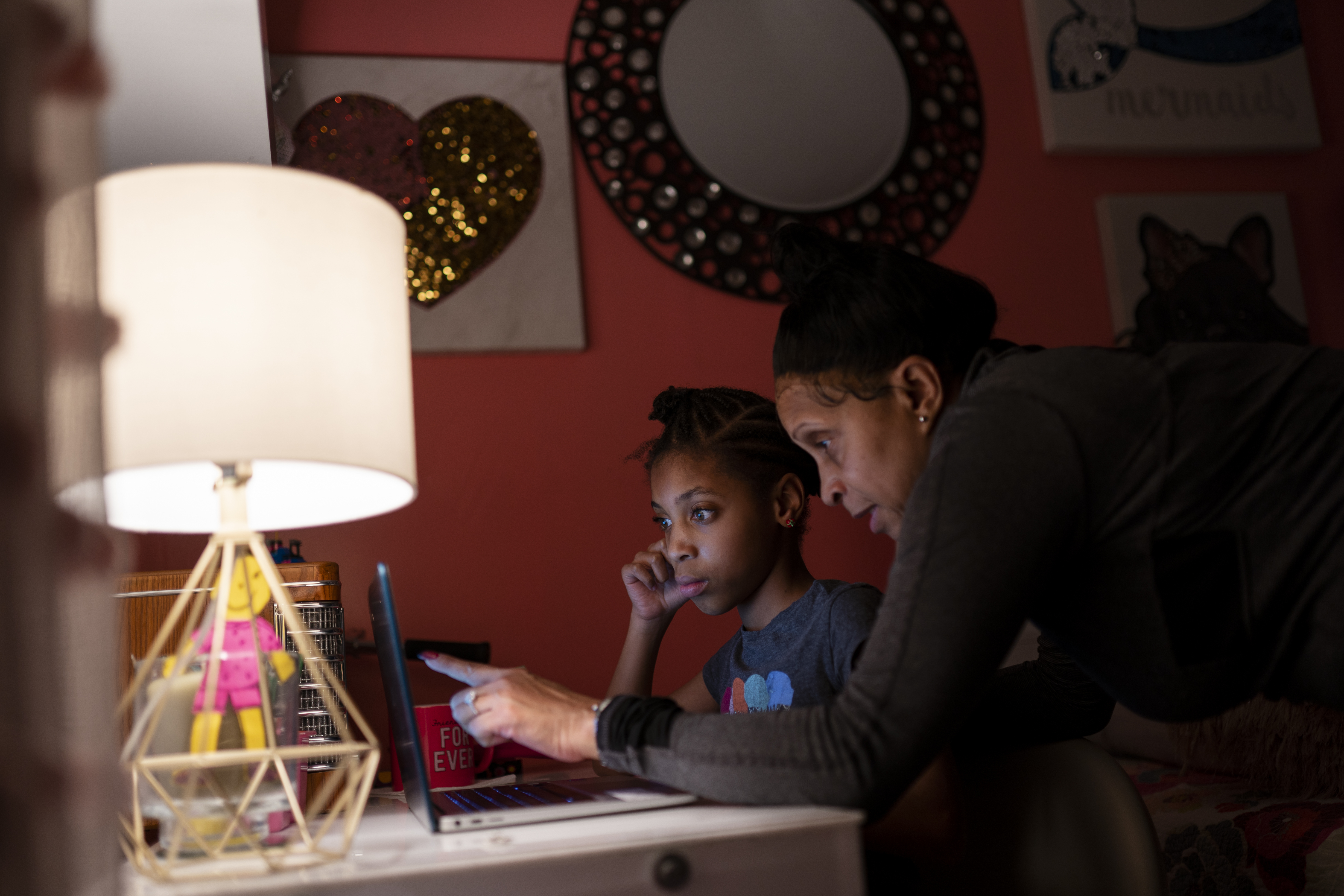 Abigail Schneider, 8, center, completes a level of her learning game with her mother April in her bedroom, Wednesday, Dec. 8, 2021, in the Brooklyn borough of New York. “I’m determined to push and push to bring them the things that help them,” April Schneider said. “I have to go above and beyond to make sure all the requirements they need are met.” (AP Photo/John Minchillo)